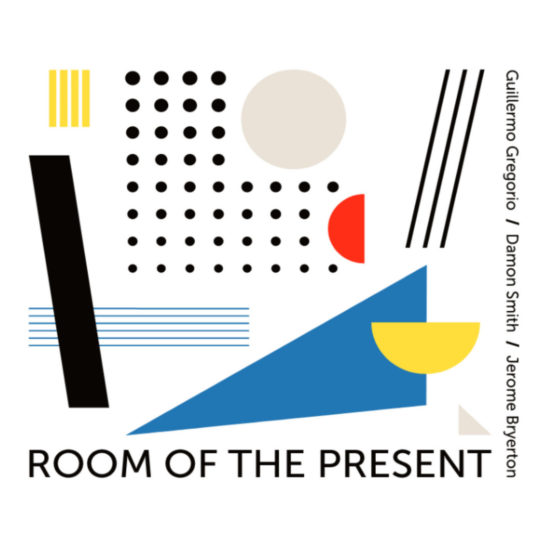 In the complete score, at top, shapes float in a blank void. Bars of notated music and sections of musical staff are the only reminders of a conventional score. Look at them again and imagine that you can’t read music. Black dots scatter, one by one, across five parallel, horizontal lines. Gregorio isolates the dot and the line and reimagines them as the vocabulary for a new visual language that only exists in this universe. Dots grow into circles and shrink into specks. They rotate to form ellipses and cut off into hemispheres and circle segments. Lines wander and multiply, streak across the void at dynamic angles and assemble with martial order to create geometric shapes. One renegade line in the upper right arranges itself into a nest of intertwined triangles. Like all good graphic scores, Moholy 2 offers the performer countless variations of simple units to interpret.

But this complete score with all its richness is only part of a two-layered system. A second sheet, which Gregorio calls a “mask,” sits on top of the complete score, blocking it except for twelve open circles that focus the performer’s attention on specific passages. Moving the mask invites the potential for endless permutations. For these performances, black-and-white versions of the score were used, but the color versions illustrated here introduce a new layer of complexity.

The score’s hybrid status as art and music, its geometric abstraction, elegant simplicity, and infinite variety, continue the spirit of Moholy’s expansive art. A polymath, he introduced Russian-style constructivism to Berlin, led the Bauhaus metal workshop, worked as a set and lighting designer for experimental theaters, and founded the New Bauhaus in Chicago, now the Institute of Design, all before his death at the age of 51. Even more impressive are his writings, which open a window into one of the 20th century’s most inquisitive minds. In his first book, Painting, Photography, Film published in 1925, Moholy exhorted his reader to understand art as part of the Gesamtwerk, the wholeness of life, a vast integrated totality of action and idea. More than his paintings, Moholy’s words continue to inspire creative artists like Gregorio today.