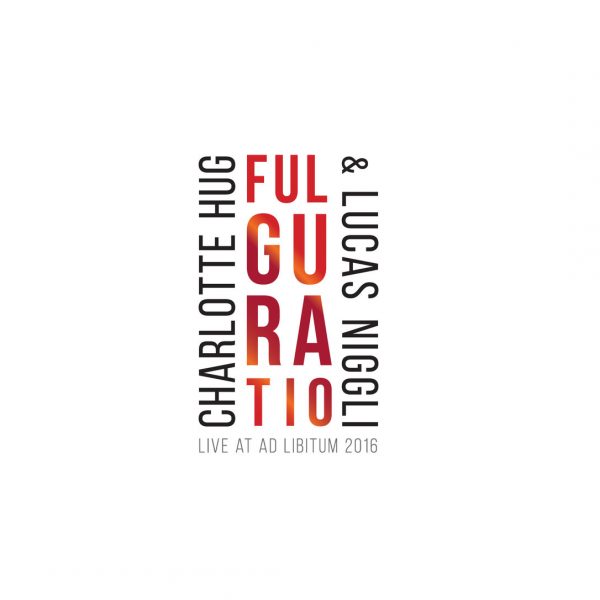 Drum and voice – a more archaic pairing could hardly be imagined. Under this motto, in 2016 the festival “Ad libitum” in Warsaw invited Charlotte Hug and Lucas Niggli as an improvisation duo. Although they live in the same city of Zurich, this was a first for both musicians. The electrified audience was just as overwhelmed by this recent discovery as the duo themselves: if they had known that their meeting would release such an exceptional, electrifying energy, this duo would have been born long before that evening.

Hug and Niggli have a similar archaic approach to their production of sound – but came to it from quite different directions: Hug is a classically trained viola player and a visual artist. At the same time, she is a composer, performer and voice artist. She integrates the various disciplines into her own intermedia art form. Niggli, one of the most versatile drummers of his generation, operates mainly in the field of free jazz and improvisation. What connects the two musicians is their fascination with freedom in music. On this basis their CD “Fulguratio” was created.

From their contrasting positions, using improvisation and with great compositional awareness, in the sense of Instant Composing, the duo explores the potential of their great range: how close and how far can they be and still communicate with one another and even create sparks? Hug and Niggli allow the extremes of tone and energy in their “instruments” – the fragile and the robust – to collide purposefully and release their charge like a flash of lightning. The thunder roll which they attract acquires a life of its own. Thus, variants of this discharge of energy – “Fulguratio: sheet lightning” “Obliqua Fulmina: spider lightning” – and other meteorological phenomena – “Virga: drizzle” “Lacunosus: lacunosus cloud” (cloud cover with holes like a loose honeycomb)
have become metaphors of their immaterial and at the same time physical music. Just as purposefully, the Duo allow the extreme tonal opposites to come close together, to touch, to rub, to merge into one another – to the point where percussion and voice are barely recognisable as such and are perceived rather as a hybrid “third sound”. Into this hybrid soundscape, Charlotte Hug also integrates the viola. The supposed divide between the archaic elementary power of the voice and drum and the cultivated musical art object, which a viola traditionally embodies, brings the Duo/Trio with its shimmering playfulness almost to the point where they disappear entirely: voice and drum are applied for percussive as well as melodic purposes. Where Hug draws out the most original, most physical sounds from her viola, each exclusive artistic characteristic enters the background in its own right. For the Duo therefore this also means freedom: freedom to navigate with archaic power and stylistic flexibility spontaneously and sensitively through the whole spectrum of sound between tonal extremes and hybrids.

Warmest thanks to Maciej Karlowski and the team of the Festival Ad Libitum and the Swiss Arts Council Pro Helvetia.