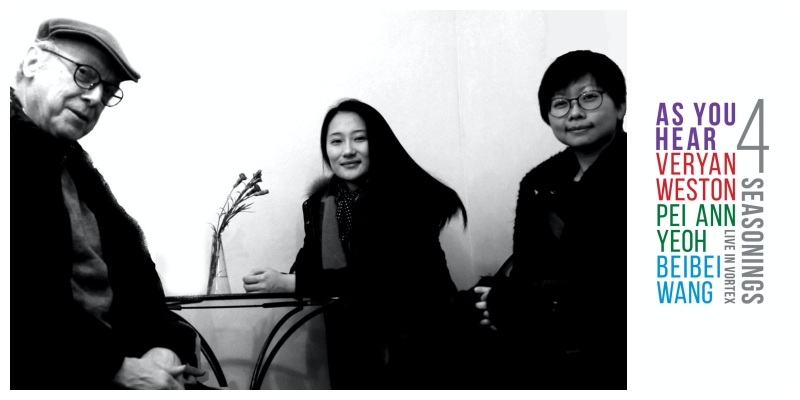 The best live improvisation requires a consummate range of skills and personalities, all of which hold true from this gig by the trio of Veryan Weston, Pei Ann Yeoh and Beibei Wang. As well as a good dose of chutzpah and bravery, they possess a great breadth of skill and understanding of music of all genres and eras, from nearly anywhere in this world, in addition to an empathy and awareness of each other to create music ‘on the fly’. There was also the confidence to believe that the result of their gig at the Vortex was worth recording and releasing.

The co-operation and trust of the musicians for each other is evident from the first note. There are no periods where the musicians seem to be holding out for new inspirations. And, while it was great to experience the first time live, the purity of the recording repays repeated listenings, as nuances are clarified. They react to each other fast that makes the whole evening flow.
So at some stages it may be just a brief percussion figure, at others just a lyrical snatch on the piano or violin that leads to a new stage in the evening. Listen out even for a small snippet of ‘Happy Birthday’, to celebrate the birthday of Beibei’s father that night.

This album is helped by two further features. A sympathetic ambiance created by the audience at the Vortex that night, and a great recording by Alex Bonney, perhaps helped by the fact that he himself is an excellent musician with a strong understanding of the instruments involved and of the style of music being performed. Many of the best new recordings made at the Vortex or by the musicians from this scene seem to have the hand of Bonney!

We have two different generations of musician involved here. The ‘father figure’ is Veryan Weston, who has been a stalwart energising presence on the London scene for many years, playing with relative youngsters Beibei and Pei Ann. It is through the existence of musicians like Veryan, open-minded with a broad understanding of musical history and a consummate risk taker, which has encouraged musicians like Beibei and Lei to make their homes here.

The music epitomises to me part of the thrill of the scene here. Although from two generations, it’s certainly no “master-pupil” situation. Musicians listening hard to each other, no preconceptions and the ability to change what is going on in an instant. The audience joins them on a special journey, and by the joy of having a recording, it is one that can be repeated often.