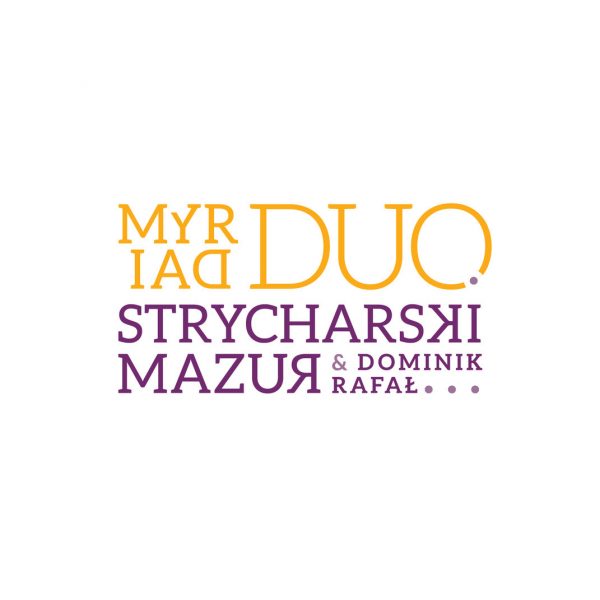 It’s time for the second album of the Słuchaj Foundation and the publishing house. Not so long ago we launched the first title in our catalogue – Komeda Ahead by Olesi brothers and Christopher Dell. Now it’s time for Dominik Strycharski and Rafał Mazur to take the floor with the album MYRIAD DUO.

Who are both gentlemen? There is no need to remind any of our readers. We interviewed both of them on our website, their records we were lucky and had a great pleasure to review. It happened that one of them, Dominik Strycharski, also appeared in our magazines as a reviewer, presenting his very subjective selection of albums that made a particularly strong impression on him. They both cooperated with each other many times, on various occasions, which Rafał Mazur in liner note for the album Myriad Duo described as ruled by accident.

However, it also happened to them when only two of them stood on stage. It was in the Krakow club Literki, in the first half of February 2013. It was also a great happiness that the concert was recorded, even more so, that it happened between these excellent improvisers, in our opinion, it took the form of something more than just a successful concert. It doesn’t happen very often, but it happens that the musicians sparkle in a completely unique way. The Literature is sparking like this!

It is also true that the material recorded at that time was in the hands of Mr. Rafał Drewniana, who many times before gave testimony that he can conjure up a sound in the whole complex process of mixing and remastering that can dazzle listeners.

For us, the greatest happiness turned out to be that Rafał Mazur and Dominik Strycharski were willing to release this music. Thank you very much for that. And now we proudly present the music of MYRIAD DUO to you, the Jazzarium readers, listeners, fans of improvised music, jazz or whatever you want to call it. Listen to it boldly, without embarrassment, share with us your opinions about it, and when you decide that it is what your soul needs, not only in online listening, do not hesitate to order it!

Music composed during Myriad Duo's concert at the Klub Literki in Krakow on 12th February 2013.
MUSIC COMPOSED IN PERFORMANCE BY Dominik Strcharski & Rafał Mazur AT LITERKI, KRAKÓW, POLAND ON FEBRUARY 12, 2013.